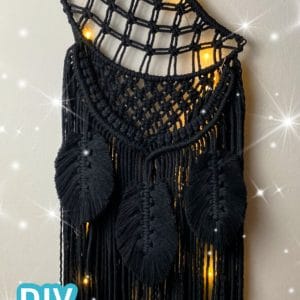 Learn how to make a beautiful and dramatic Crescent Moon Macrame Dream catcher with Feathers in this step by step tutorial!

When I got this awesome crescent moon frame from Unfettered Co., I just knew I had to do something special with it.

I decided to make this moody black crescent moon dreamcatcher with gorgeous black macrame rope, and I’m over the moon with it! (pun intended)

How Do You Macrame a Dreamcatcher?

There are a few different methods, but I wanted to stick with something simple.

The knots on the inside of the moon shape are square knots, and they’re secured to the frame with double half hitch knots.

You’ll need to know the square knot, double half hitch knot, and larks head/cow hitch knot for this tutorial. It’s a lot simpler than it looks!

This project is suitable for beginners, you’ll just need to tackle one task at a time and it’ll be done before you know it.

Where Should I Hang My Macrame Dreamcatcher?

Traditionally, dream catchers are hung on the wall behind your bed to help keep nightmares at bay.

This project is also a great DIY decor idea for your living room, kitchen, or even the bathroom if it fits the theme.

My daughter claimed the one I made for her room. I think this would also be a great project for a teen bedroom or a dorm room!

How Do You Make the Macrame Feathers?

Macrame feathers are an awesome beginner project because they’re so easy but they look so cool!

The hardest part of the feather making process is brushing and cutting. It takes a while to get it just right. I honestly think this part is fun though and it’s my favorite part of this whole dreamcatcher!

You can also check out my macrame feather tutorial here. I’ve since upgraded to a wire pet brush to brush them out, but the knotting technique is the same.

I’ll also quickly show you how to make the feathers in the tutorial below.

For this project, you’ll need:

I default to 63″ pieces because that’s roughly my arm span and it’s a lot easier for me to measure rope that way. If your arm span is a few inches longer or shorter, that should work fine too.

You’ll end up trimming it down a bit at the end, but I like long dramatic fringe for this piece.

For the 8″ pieces, first use the excess rope you’ll be trimming off the 45″ pieces after you do the square knot mesh inside the frame. Then cut the rest. Don’t want to waste that precious rope!

Step 1: Attach the ropes to the frame

Hang the crescent moon shape sideways so the inside of the moon is facing up.

You’re going to attach 9 pieces of 45″ long rope first, then scoot them to the left and attach 7 pieces of 63″ rope on the right side.

To attach the ropes, first tie a cow hitch knot. (It’s a larks head but just flipped the other way)

Then, bring the right cord up and around the frame and pull it through the loop, to make a half hitch on the right side. Repeat that with the left cord. This is how it’ll look one it’s complete.

If that’s super confusing, watch the first part of the video. It’s kind of hard to explain.

Here’s how it’ll look with all the ropes attached.

Step 2: Tie the knots inside the frame & attach

To start, grab the first rope on the left and tie a double half hitch knot around the frame, pulling it tight.

Then, tie a square knot using the rope you just attached to the frame and the next three cords.

Repeat that on the left side.

Now attach the two cords on the left to the frame with double half hitch knots.

Skip the cords you just tied to the frame and tie a row of square knots alternating from the first row.

For the next row, tie alternating square knots skipping another two cords at the beginning and the end of the row. Repeat that process down until you only have two square knots in your row.

The picture below is how it will look on your second to last row.

Pull all the cords through the frame so they’re hanging behind it. Attach each cord to the frame with double half hitch knots. Pull the knots tight to stretch the square knot mesh evenly on the frame.

Now you can trim the 45″ cords down and use the excess for feather fringe later (you’ll need 8″ pieces).

Leave the longer cords on the right the way they are.

Step 3: Attach more long cords to the bottom of the macrame dream catcher

Turn the dream catcher on your workspace so the long cords are hanging down at the bottom (this is how it will hang when it’s complete.)

Use larks head knots to attach 14 of the 63″ ropes to the bottom of the dream catcher. I put two ropes in between each knot.

Find the center four cords hanging off the bottom and tie a square knot.

Now tie six more rows of alternating square knots, skipping two extra cords at the beginning and end of each row. It’ll look like this when you’re finished.

Grab the third and four cord from the outside on both sides. Pull them into the center and tie a square knot just under the last square knot you tied previously.

Tie a row of double half hitch knots down the left side of the fringe, and then a row on the right side.

Join it together in the middle with one last double half hitch knot.

Grab the center two fringe strands. We’ll attach the feather fringe pieces a few inches down from the row of double half hitch knots.

To attach the feather fringe, fold one piece in half and hold it in front of the two strands with the loop facing to the left.

Then take another piece, fold it in half and hold it behind the two strands with the loop facing right.

Pull the ends of each piece of fringe through the loop of the other piece and pull it tight around the center cords.

Repeat that process back and forth ten times. Then tie an overhand knot at the bottom to hold the fringe in place.

Make two more feathers, one on the left and one on the right of the macrame dream catcher, using the 13th and 14th strands from the outside as the center cords. These feathers will be a few inches higher up than the center feather.

Once you get them all made, it’s time to brush them out and cut them into shape. This part takes a WHILE, but it’s kind of fun (or at least I think it is!)

Brush the fringe out really well with your pet brush. Next, spray them down with some stiffening spray on both sides. That step is optional, but it helps them lay better and not curl up over time.

Cut the fringe into a feather shape.

Step 7: Wrap and finish the frame

Now it’s time to deal with the ends on the top part of the moon frame.

At first I had planned to leave the ends a few inches long and added more fringe to fill in the gaps. I brushed it out and it looked like the moon had a mohawk.

Instead, I took out the extra fringe and decided to cut the ends down and glue it to the frame, and then wrap the frame to make it look nice and neat. Here’s how I did it.

Then, hot glue the short ends to the back of the frame.

Do this all the way around the edge.

Then, just to make it neater, I added some tacky glue to the ends and smoothed them down to make sure they weren’t sticking out all over the place.

Next, take the last piece of 63″ rope and wrap it around the frame. I used a crochet hook to pull it through the small hole in the corner and then wrap it around between all the knots.

Make sure it covers all the ends and the exposed parts of the frame. Here’s how it looks when it’s halfway done.

Once you’re finished wrapping, insert the end of the cord through the last wrap to secure it in place. I left the long end hanging because it just blends in with the fringe.

Go back to the beginning where you started wrapping and glue the end down to the back of the frame.

Now you can go through and untwist some of the strands of long fringe to give it some fun texture.

I didn’t add a hanger to the top, but you can if you want. I’m just hanging my macrame dream catcher from a nail as it is.

I hope you enjoyed this Crescent Moon DIY Macrame Dream Catcher tutorial! For more fun macrame tutorials, check out the links below.