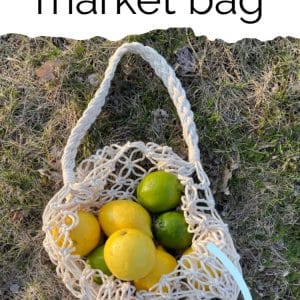 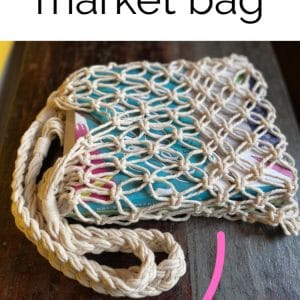 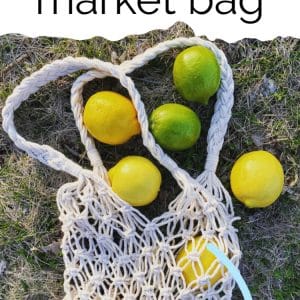 Macrame everything is so in right now and I’m completely obsessed.

With some cotton rope and basic knots, you can make gorgeous boho-chic decor and accessories.

Today I’m going to show you how to make this adorable DIY macrame bag!

One of my goals with this bag was to make the straps as comfortable as possible. I wanted it to be functional while still looking super cute and trendy.

As a test, I filled it up with lemons and limes and carried it on my shoulder while taking a walk with my kids (and carrying my toddler part of the time).  That’s a totally normal look, right?

It worked great and the straps didn’t hurt my shoulder at all! Even though I looked like a weirdo carrying a bag of citrus fruits on a walk around the block, I think it was a success!

If you’re new to macrame, this DIY bag is a good project to try once you get the basic knots down.

The macrame techniques used for this bag are the square knot, the gathering knot, and a four-strand braid.  I attached the bottom of the bag together using regular old double knots and I added some glue to make it extra secure.

You’ll find the video tutorial below, as well as the written tutorial.  Be sure to take a minute and subscribe to my YouTube channel for new tutorials and DIY projects!

(This post contains affiliate links. If you click one and make a purchase, I may receive a commission at no extra cost to you. Find out more here. Thank you for your support!)

First, we have to mark where the handles are going to be.  For my bag, I made the braided sections roughly 22” long.

My way of determining where to start braiding wasn’t very scientific.  I had each group of 16 strands looped over a dowel and lined up the ends.

Then I measured 11” down from where the rope was hanging from the dowel and put a piece of masking tape on one side.

After that, I took the taped bundle of cords off the dowel and flipped it around. I secured them to the dowel with a loose knot

Next, I divided the cords into four groups of four and did a four-strand braid starting where the tape was, checking periodically if it was a long enough braid.

Repeat that sequence until the braid is the length you want.

I actually ended up doing that, then taping at the end of the braid, flipping the bundle around, un-taping the other side and adding a bit more braid so it was even.

You just want to make sure your handle is the length you want and it’s centered so there’s an equal amount of rope hanging down on either side.

Repeat that process with the other handle and check to make sure they’re both the same.

Once you get the braided handles the way you want them, we’re going to tie a gathering knot at each end of them to hold it secure.

You’ll need the 4 shorter pieces of cord to do this part.

The rest of the bag is made with alternating square knots.  Leave about an inch to an inch and a half of space in between them and keep the rows even.

I recommend draping both handles over the dowel and working on the two sections facing you, and then we’ll flip it around after we get those attached and do the other side.

Starting on the left under one of the gathering knots, skip the first two strands and make three square knots from left to right.

Leave an inch or so of space under the knots and then do a row of four square knots, then leave another inch below that and do one more row of three square knots.

Now repeat this sequence on the other side facing you (not the back ones yet).

Make this connecting square knot even with the third row of square knots we made previously.

You’ll now have a row of square knots going all the way across this side of the bag.

Make one more row of alternating square knots an inch or so below this row.

Step 5: Do all of that on the other side

Flip the bag around and repeat all the steps we just did on the first side on the second side.

Take care to make the rows of knots even with the other side so everything will line up properly.

Now it’s time to attach the sides together.

Use the two cords hanging on the left side of the front and back part of the bag, tie a square knot that’s even with the third row of square knots from the top.

These knots will be even with the fourth row of knots.

Do the same process on the other side of the bag. Now you should have basically a tube shape with handles.

To finish the body of the bag, keep making rows of alternating square knots.

I had 10 rows altogether, but you could make it longer if you like.

You can make a few rows in the middle of the bag a little closer together for visual interest, that’s what I did.

Or you can keep them all equally far apart, it’s up to you. It goes faster if you keep more space between the knots.

Step 8: Tie the bottom together

I learned how to this part by watching Emily Faith’s video.

I tried a couple of other ways, but this was the most straightforward technique I saw, and as far as I’m concerned the easier the better!

One VERY IMPORTANT thing you’ll want to keep in mind.

Before you tie the bottom together, take your bag off the dowel and hang it in the other direction.

The picture below is showing the direction the handles are facing on the dowel.

If you leave it hanging like this when you finish the bottom, it won’t lay right.

You’ll need to hang it on a hook or something instead of a dowel so that the handles are facing the other way, like in this next picture.

I didn’t think of this when I was tying the bottom of my bag, and I realized once I had it all finished that the bag didn’t lay right when I had it on my shoulder.

I’m way too OCD to leave it like that, so I had to untie and fix it which was a little tricky considering I had cut the strings and attempted to brush the fringe out.

Don’t be like me.  LEARN FROM MY MISTAKE! (If you don’t know what I mean, watch the last part of the video and you’ll see what I mean.)

OK, now that the PSA is out of the way…

To tie the bottom, you’ll line up all the square knots in on the front of the bag and the back of the bag.

Then, starting at the far left, grab the two left cords from the front and back square knots and tie them together like you’re going to tie your shoe.

Tie it the same way again, making a double knot.

Pull it nice and tight. Do the same thing with the two right cords from the front and back square knots.

Continue this all the way along the bottom of the bag. (You’ll have two double knots for each pair of square knots.)

Step 9: Cut the excess rope and add some glue

Cut the excess rope leaving about a quarter inch sticking out.

Add some glue to each knot (I used nontoxic Tacky Glue) and smooth the ends down against the knot.

Let the glue dry and then flip your bag so the knots are on the inside. Done!

I hope you enjoyed this DIY market bag tutorial!

I'm Crystal, the crafty lady behind Marching North. I'm a stay at home mom with a passion for creating. My goals are to spark your creativity and teach you how to make beautiful things one step at a time. Thanks for stopping by!