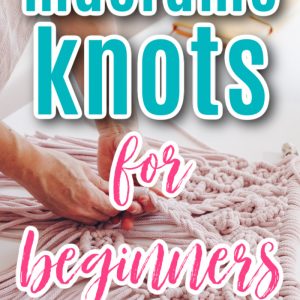 Learn how to do the basic macrame knots for beginners in this step by step guide!

When you’re first starting to learn macrame, it can be overwhelming trying to figure out how to do all the different types of macrame knots.

The five most important macrame knots for beginners to learn are the lark’s head knot, cow hitch knot, square knot, double half hitch knot, and the wrapping knot.

You can grab a free printable PDF of the 5 basic macrame knots down below!

I’ve included a few videos, and also a step by step written guide with photos in this list of common knots to get you started off right!

Get your copy of 60 Macrame Knots & Knot Patterns eBook today!

Click here to find out more about this helpful macrame knot book that features step by step photo tutorials for 60 different macrame knots and knot patterns!

It’s a perfect resource to help you take your macrame creations to the next level.

To make a Lark’s Head Knot, take your rope and fold it in half. Then put the loop over and behind the dowel. Now, pull the ends of the rope through the loop and tighten.

This simple knot is frequently used to attach your cords to a dowel rod or metal hoops for macrame wall hangings.

To tie a Vertical Larks Head Knot to the right, take the cord on the right and bend it in front of the left cord in an “L” shape. Then bring the end of the right cord behind and through the loop.

Hold the right cord in the shape of an “L” again, this time behind the left cord. Bring the end around in front of the cord and through the hole and tighten.

The Cow Hitch Knot is done the same way as the Larks Head knot, except the folded end is brought up behind and over the dowel, so it’s facing the other way.

To make a Square Knot, you’ll need four cords. The ones on the left and right will be your working cords and the two in the center will be your filler cords.

Bend the left cord in front of the two middle filler cords and under the right cord.

Then, bring the right cord behind the filler cords and up through the loop you made in with the left cord and tighten. This is called a half knot.

To complete the square knot, you’ll make another half knot, but this time it’ll be reversed.

Take the right cord and bring it in front of the filler cords and under the left cord.

This common macrame knot can be used for basic designs or to make beautiful patterns depending on your placement.

Alternating Square Knots are made by changing the cords you use in each row.

For the first row, you’ll make square knots as usual.

Then for the second row, you’ll skip the first two cords and then start your square knots.

You’ll go back to the first pattern on the third row and repeat the second-row pattern for the fourth row, etc. This technique makes a nice mesh pattern.

Click here to see this Double Half Hitch Knot video on YouTube (it opens in a new tab).

To make a Double Half Hitch Knot (aka Clove Hitch Knot), you’ll have a filler cord and a working cord. In the example above, I’m working to the right. The technique is the same when going to the left, but reversed.

First, hold the filler cord out straight (in this case, the right cord.)

Take the left cord and cross it over the right cord. Pull the end of the left cord over and through the loop made and pull it tight. Slide the loop to wherever you want the knot to be.

Repeat that process again the same way and tighten the loop.

Related: How to Tie the Double Half Hitch Knot (Ultimate Guide!)

The Diagonal Half Hitch Knot is done the same way as regular half hitch knots, but the filler cord is held at the angle you want your row of knots to go.

Click here to see this Diagonal Double Half Hitch Knot video on YouTube (opens in a new tab).

The Vertical Half Hitch Knot looks a little complicated, but it’s really not. This knot is a great way to add color to your macrame pieces.

To start, you’ll need a separate piece of rope to use as your working cord (in the example above, I’m using the orange cord.)

Then bring the working cord back in front of the filler cords, wrap it around and pull it through the loop.

Move onto the next set of filler cords and repeat until you get to the end of the row.

At the last set of filler cords, you’ll make the first half of the double half hitch knot like you have been, but then you’ll pull the end of the working cord to the left side behind the filler cord.

Then, bring the working cord in front of the filler cords from left to right, and pull it through the loop.

I know this sounds confusing all written out, I would definitely recommend watching the video for this knot! It’s easier than it sounds. You can make a beautiful piece with this technique!

A Half Knot Spiral is made by doing the first half of a square knot and repeating it for the next knot (and all the rest of the knots) instead of reversing it.

The direction of the spiral will depend on if you start on the right or left with your half knot.

The Half Hitch Spiral Knot is similar to the Half Knot Spiral, but it’s done with half hitches.

Just keep tying a half hitch over and over on the same filler cord and it will naturally form a spiral.

To tie a Berry Knot, first you’ll need to tie three or four square knots. In this example, I started with three.

Now, take the two center cords and thread them up and through the center at the top of the first square knot.

To tie a Barrel Knot, first make a loop with your cord crossing the end in front like the first picture.

Then, wrap the end of the rope around and through the loop three times. It’ll look like the second picture.

Hold on to both ends and pull until it looks like the third picture.

To tie a Wrapping Knot, you’ll need a spare piece of cord that’s a foot or so long (depending on how many wraps you plant to make and how thick the cord is).

Make a “U” shape with one end of the piece of cord. Hold the “U” shaped cord against the filler cords (all the cords you’ll be wrapping around) with the short and long end of the cord facing up, and then bent “U” part facing down.

Begin wrapping around all of the cords (including the short end) with the long end of the wrapping cord. Each wrap will be under the previous wrap and be sure to keep them all snug together but not overlapping.

Once you’ve made 7 to 10 wraps (or however many you want), loop the wrapping cord through the loop made by the bottom of the “U”.

Pull the top cord sticking out of the wraps (short end of the working cord) to tighten the loop.

Keep pulling the top cord until the loop draws up into the wraps about halfway. You don’t want it to come up out of the top of the wraps.

Now you can trim the two ends of the wrapping cord and push the ends down into the wraps.

The Overhand Knot is a super basic knot that you probably already know how to tie.

The Constrictor Knot is a great knot for tying a hanging cord onto your finished macrame project.

In the pictures above, I’m working on the back of my macrame piece, and it’s upside down.

You’ll need a piece of cord to use as the hanger and the length will depend on how long your project is. The knots won’t take up too much cord.

Starting on the left side as shown in the first photo, hold the cord in front of the dowel with the short end facing up.

Wrap it over the dowel and around like I did in the second photo.

Wrap it around the dowel again, this time crossing over the first wrap to make an “X” and bringing the end over to the left.

Now, bring the short end of the cord in front of the long end, and then you’re going to push the short end under the middle of the “X” and through.

I usually cut the short ends down to about an inch or two once the hanger is tied on and glue them down on the back of the dowel so they don’t hang down.

I hope you found this list of Basic Macrame Knots for Beginners helpful!

You can create just about any macrame decor you can think of with this list of knots!

Want more macrame ideas and free patterns? Check out the most recent posts below!