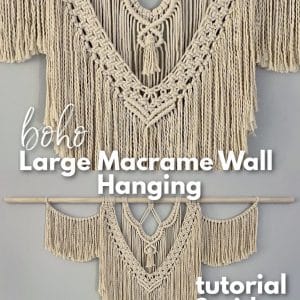 Not only is it gorgeous, but it’s really simple (and surprisingly fast!)

I finished this wall hanging in a few hours. If I wasn’t fiddling with my camera and trying to get the lighting right, it would of gone even faster.

You’ll only need a few simple knots for this macrame wall hanging: the lark’s head knot, square knot, double half hitch knot, and the rya knot.

This project is totally doable for beginners and beyond!

(This post contains affiliate links. If you click one and make a purchase, I may receive a commission at no extra cost to you. Read the disclaimer here. Thank you for your support!)

Get the printable Ad-Free, Large Print version of this pattern in my shop! Includes full photo tutorial and black and white printer friendly version.

Get the Ad-Free pattern

How Big is this Macrame Wall Hanging?

The dowel is 48″ long, and the actual macrame part is about 36″ wide and 29″ tall from the top to the bottom of the fringe.

For reference, it fits nicely on the wall behind our king sized bed with some room left over on each side.

How Much Cord Will You Need for this Large DIY Macrame Wall Hanging?

All together, you’ll need *about* 404 feet of 4 mm cotton macrame rope for this wall hanging.

The exact number came out to 403.something, so I rounded up. (Have I mentioned that I hate math?)

I’m more of an eyeballer when it comes to measurements, but I do my best to be accurate when I create these tutorials. That being said, I recommend having a little extra rope laying around, just in case.

You’ll find a cut list for all the different cord lengths required under the supply list below.

What Cord Should I Use for a Macrame Wall Hanging?

You could also use single strand cotton, but it’s a little more delicate and takes a little more effort to keep the knots looking even. It would still work though!

Another option is braided cord, but you wouldn’t get the nice fringe at the end.

I like the three-strand twisted for this because it holds up well for knotting, and the fringe is really pretty when you untwist it at the end. You don’t have to brush it out (I didn’t for this project) and it’s all wavy and just looks cool without much effort.

This is my FAVORITE three strand twisted cotton. Pretty much everything in this shop is my favorite.

What Else is Needed for this Macrame Wall Hanging?

Besides the macrame rope, you’ll also need a 48″ wooden dowel (mine is 3/4″ in diameter) and a rack of some sort to hold your work while you’re knotting.

I use a clothing rack and it works really well. I’m hoping to upgrade to one of these awesome metal pipe racks in the near future, they’re so cool looking!

You’ll just need something that holds the dowel still while you’re working and is high enough off the floor so you have room for the cords.

You’ll also want a sharp pair of scissors to cut the fringe. I love my Gingher scissors and I highly recommend a pair for anyone who’s serious about macrame. They’re so sharp! (Be careful though, I keep these FAR AWAY from my children!)

Now that we have all of that out of the way, let’s get down to knotting!

Fold the four 70″ long pieces of rope in half and attach them to the dowel with lark’s head knots.

Space them out with the two center cords right next to each other in the the middle, and the two outer cords about four inches away on either side.

Then, tie a square knot with the center cords right under the lark’s head knots.

Tie a square knot on the left side and the right side about four inches down from the first square knot.

Finally, tie the last square knot in the center about four inches under the last two square knots.

Step 3: Tie a row of double half hitch knots

Add one of the 64″ pieces onto each side with a lark’s head knot.

You’ll need to adjust it so the outer cord (the one on the left in this photo) is even with the fringe pieces, and the inner cord (which will be the filler cord) is way longer.

Do the same thing on the right side of the wall hanging, but the opposite way.

Tie a row of double half hitch knots using the long cord as the filler cord.

Only use the fringe we added before this for the knots, don’t use the cords hanging behind the fringe from the square knots in the first section, it’ll get too crowded and lay weird.

For the last double half hitch knot, cross the two filler cords and use the filler cord from the left side as the working cord.

Attach four of the 128″ long ropes on the left and four on the right by folding them in half and using lark’s head knots to secure them.

Tie 23 rows of alternating square knots on each band. Start with two square knots, then one on the next row, two on the next, and continue that pattern for all 23 rows.

Go back to the center section where we tied the double half hitch knots, and now we’re going to add a diamond shape.

Only use the cords from the fringe we added for this part, ignore the four cords hanging behind them in the center from the square knot we tied in the first section.

Grab the left center cord and tie three double half hitch knots going down and to the left.

Then grab the right center cord and tie three double half hitch knots going down and to the right.

On the left side, tie three more double half hitch knots going down and to the right.

On the right, tie three more double half hitch knots going down and to the left.

Cross the two filler cords and tie one last double half hitch knot in the center using the right filler cord as the filler.

Go back to the left side and tie a square knot between the knot you tied a minute ago (the one from the 2nd photo) and the center knot. (4th photo)

Tie a square knot between the other square knot you tied a minute ago (from the 3rd photo) and the center knot. (5th photo)

If my explanation of this was confusing, check out the video! (It’s kind of hard to explain this in words without it being super confusing, at least for me. I’m a visual person.)

Step 7: Tie two rows of double half hitch knots under the “V”

Using the farthest cord to the left of the front section as the filler cord, tie a row of double half hitch knots down to the bottom of the “V”.

Make one more row of double half hitch knots, repeating the same steps from the first row.

Add the 34″ long pieces of fringe to the loops on the sides of the alternating square knot bands. Attach them using lark’s head knots.

There are 23 pieces on each side. Two pieces fit in each loop and you can fit one piece at the top

under the larks head knot (I hadn’t added that one yet in the photo above.)

Attach the 47″ long pieces of rope on each side to hold the outer fringe.

Starting on the left, attach one of the ropes with a lark’s head knot about 9 1/2″ away from the alternating square knot band.

Adjust the rope so the left side is about 8″ long and the right rope is much longer.

To attach the other side, bring the right cord between the alternating square knot band and the center section and loop it in front of and over the dowel.

Bring it from the left of the rope around the front, and then loop the end behind and over the dowel.

Thread the end down through the loop formed to complete the lark’s head knot. Tighten it up a bit (however low you want the fringe hanger to hang down).

Repeat that process on the right side of the wall hanging, but in reverse.

Attach 23 pieces of 16″ fringe using larks head knots on both fringe hangers that we just attached.

Untwist the three strands of 20″ long rope and hold it all together.

You’re going to thread the ends through the diamond on either side of the two center cords (where I’m poking my fingers out in the first picture).

Then, push all of the ends out through the center under the loop you just formed.

Pull it tight and adjust it so it looks nice, and then trim the ends, leaving them about three inches long.

Untwist the fringe hanging from the two sides and the front.

I left the back fringe alone, but you can untwist it too if you want.

Once you get all the fringe untwisted, give it a trim to even everything up. I didn’t cut mine very exact, I just cut off the long scraggly pieces.

I hope you enjoyed this DIY Macrame Wall Hanging tutorial! If you make one of these lovely macrame wall hangings, please post a pic on Instagram and tag me @marchingnorth so I can see it. I love to see your creations!

Check out the links below for some more fun macrame projects…

I’m Crystal, the crafty lady behind Marching North. I love sharing step-by-step craft tutorials including macrame, punch needle and other crafts to help you create beautiful DIY home decor and much more. Thanks for stopping by!