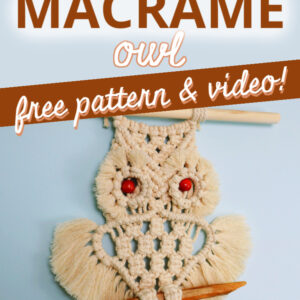 Learn how to make your own adorable macrame owl wall hanging in this free pattern and tutorial!

Macramé owls were one of the most iconic macrame art projects from the seventies. Now that macrame is becoming popular again, they’re back!

Want to remember this? Post this Free Macrame Owl Pattern tutorial to your favorite DIY Pinterest board!

In this tutorial, I’ll show you how to make a super cute DIY macrame owl with detailed step by step instructions and a video tutorial.

I went with a neutral color scheme for this project, but you can customize your owl with different colors of cord or different sizes of beads. You could even use different shapes of beads if you want.

There’s lots of ways to have fun with this macrame project!

The finished size of this owl is 14″ tall (from the dowel to the tail) and about 9″ across from wing to wing, so it’s not a super large macrame owl pattern.

You could use a shorter dowel than I did, or use another stick from outside for the top dowel for a different look. You’ll just need a dowel that’s at least 5″ long for the top.

It’s perfect to fit on a small little nook on your living room wall, in your entry way, or in a bathroom.

This is a pretty easy pattern, but you’ll want to have a grasp on some basic knots before you get started.

The knots you’ll need for this project include:

Don’t worry if you don’t know all of them, the video tutorial shows you how to tie them.

You can get step by step instructions for those knots and several other different macrame knots in my Basic Knots for Beginners post!

Check out this list of 16 free macrame wall hanging patterns with video tutorials and written instructions!

Fold the 106″ piece of cord in half to find the center. Then slide your hands out about 10 inches apart so you’re holding the cord at two spots. Each spot is about 5″ away from the center, roughly.

Drop the left side, so now the cord is folded with the left side longer and you’re holding it with your right hand only.

Attach the cord to the right side of the dowel with a lark’s head knot at that spot.

Now bring the left cord over to the left side of the dowel. Bring it over the dowel and pull the end through the center loop.

Bring the end of the cord up behind the dowel and over while holding the cord to form a loop. Bring the end through the loop and tighten.

Adjust the cord so there’s about 7 or 8 inches between the knots, but don’t worry about it too much because we’ll adjust it later.

Step 2: Make the top of the owl

Tie a square knot with the center four cords. Then tie another square knot to the left and the right of the first knot.

Tie one last square knot in the center.

Use the far left cord as the holding cord and tie 8 double half hitch knots going down and to the right.

Use the far right cord as the holding cord and tie 9 double half hitch knots going down and to the left.

Again, use the far right cord as the holding cord and tie 8 double half hitch knots going down and to the left.

Use the far left cord as the holding cord and tie 9 double half hitch knots going down and to the right.

Use the seventh cord from the left as the holding cord, and tie 2 double half hitch knots going down and to the right.

Use the seventh cord from the right as the holding cord, and tie 3 double half hitch knots going down and to the left.

Step 3: Thread on the beads

Thread wooden beads onto the 5th cord from the left and the right. Slide them up as far as you can.

Use cords 6, 7, 8, and 9 from the left to tie a square knot. Then use the next four cords to the right to tie another one.

Tie one last square knot under them right in the middle.

Grab the 2 left cords. Tie 10 vertical lark’s head knots using the far left cord as the working cord and the next cord over as the filler cord. (See the video if you’re not sure how to do that macramé technique.)

Now, do the same thing on the right side, but the other way. So the far right cord will be the working cord and the next cord over will be the filler cord.

Grab the left center cord and use it as the filler cord to tie 8 double half hitch knots going to the left. The last ones will meet up with the row of vertical lark’s head knots on the left.

Grab the right center cord and use it as the filler cord to tie 8 double half hitch knots going to the right. The last ones will meet up with the row of vertical lark’s head knots on the right.

Use the center four cords to tie 2 square knots stacked on top of each other. Then tie one square knot to the right and left of the center two.

Under those knots, tie an alternating row of four stacks of two square knots each. You’ll skip the far left and far right cords.

Tie three stacks of two square knots each alternating from the previous row.

Tie two stacks of two square knots each alternating from the previous row.

Use the far left cord as the holding cord to tie 5 double half hitch knots going down and to the right, leaving a gap at the top. We’ll attach fringe there in a minute.

Use the far right cord as the holding cord to tie 5 double half hitch knots going down and to the left. Again, leave a gap at the top for fringe.

Grab the four left center cords (the ones from the bottom left square knot) and tie 5 square knots. Do the same thing on the right. We’ll use those knots to make the feet in a few minutes.

Take one of the 20″ long pieces of cord and fold it in half so the right side is 3.5″ long and the left side is super long.

Attach it to the metal ring with a lark’s head knot at that point.

Now you’re going to tie 5 vertical lark’s head knots going to the left around the ring. The ends of the cord will be used to attach the eye to the owls face.

Take one of the pieces of 5″ long rope, fold it in half and attach it to the ring with a lark’s head knot. Repeat that 5 more times.

Do that whole process again for the other eye.

Unravel the fringe pieces (leave the two long cords that we’ll attach the eye with), brush them out and trim them down to about 3/4″.

Hold the eyes up where they go, and make sure the bead is in the center of the rings and the fringe is facing out.

Now turn the wall hanging around while holding one of the eyes in place.

Bring the hanging cords through to the back, making sure that the top one comes out above the square knot next to the bead. Tie the two cords in a double knot.

Repeat that with the other eye.

Attach 5 pieces of 5″ cord to the left and right gaps on the wing sections.

Grab your stick that you’re going to use for the perch. Hold it in front of the two rows of square knots at the bottom.

Take the two right cords from the right row of square knots and bring it up in front of the perch and wrap them behind it to the right of the knots.

Do the same thing with the left two cords, but on the left of the knots.

Now tie a square knot under the perch to secure it in place.

Repeat that with the left foot.

Over on the left, cut the 5 cords between the wing fringe and the perch so that they’re even with the wing fringe. Do the same thing on the right side.

Save one of the longer pieces of excess cord to use for the wrapping knot.

Gather the cords hanging at the bottom and use the cord you just saved to tie a wrapping knot with 7 wraps.

Trim the tassel at the bottom as long as you want. Untwist the rope in the tassel and the wing fringe and brush them out if you want.

Brush out the wing fringe and trim it if necessary.

Trim down the cords we used to attach the eyes. Add a drop of glue to the knots if you want, I didn’t but it never hurts.

Use stiffening spray on the wing fringe so it stays in place better if you want. Otherwise, it tends to get folded and twisted.

Now your wall hanging is complete! I hope you enjoyed this easy macrame owl tutorial and you made your own fun DIY home decor using this free pattern.

If you did, please share a picture over on Instagram and tag me @marchingnorth so I can take a look. It makes my day!

If you’re looking for more free tutorials, check out the links below!